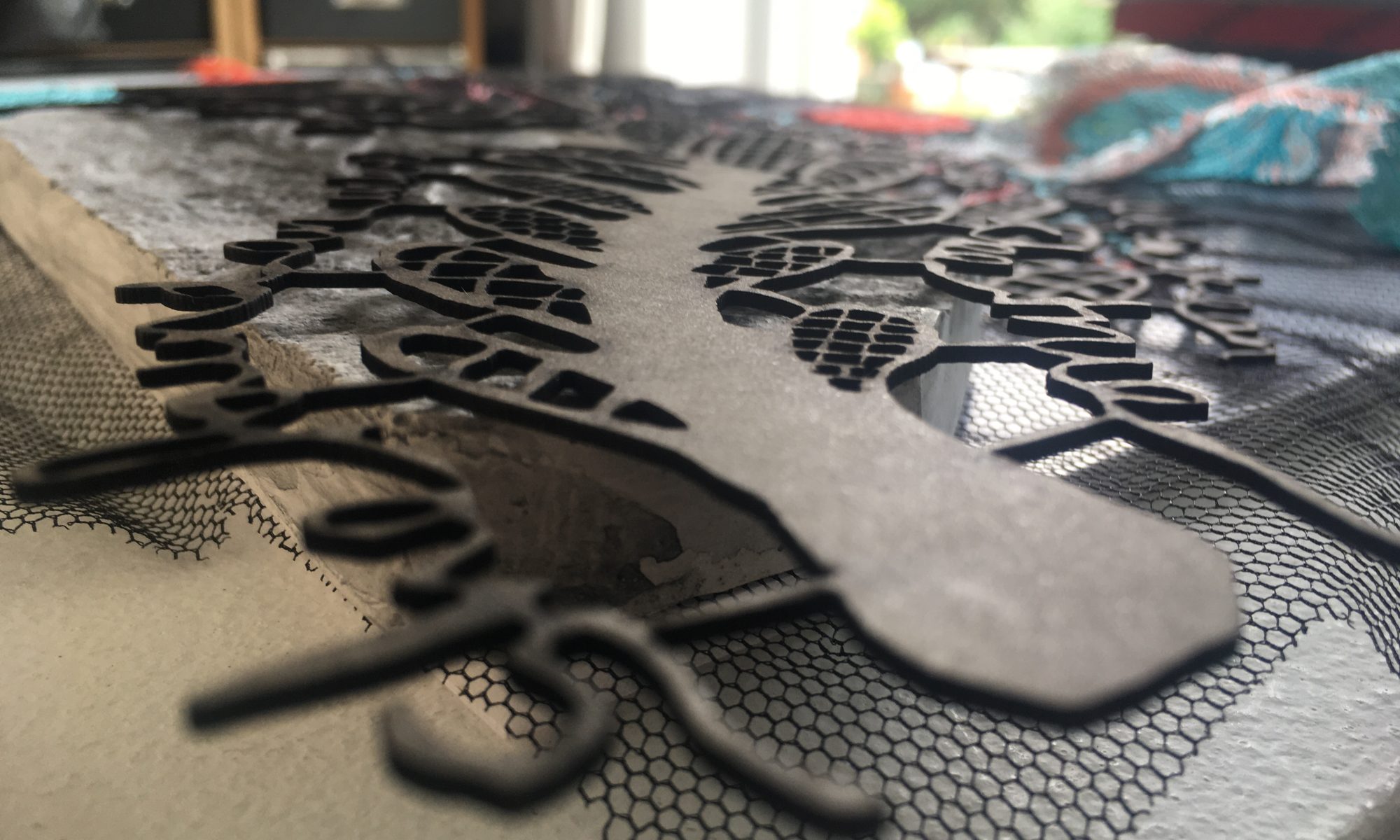 Prev
Next
Prev
Next 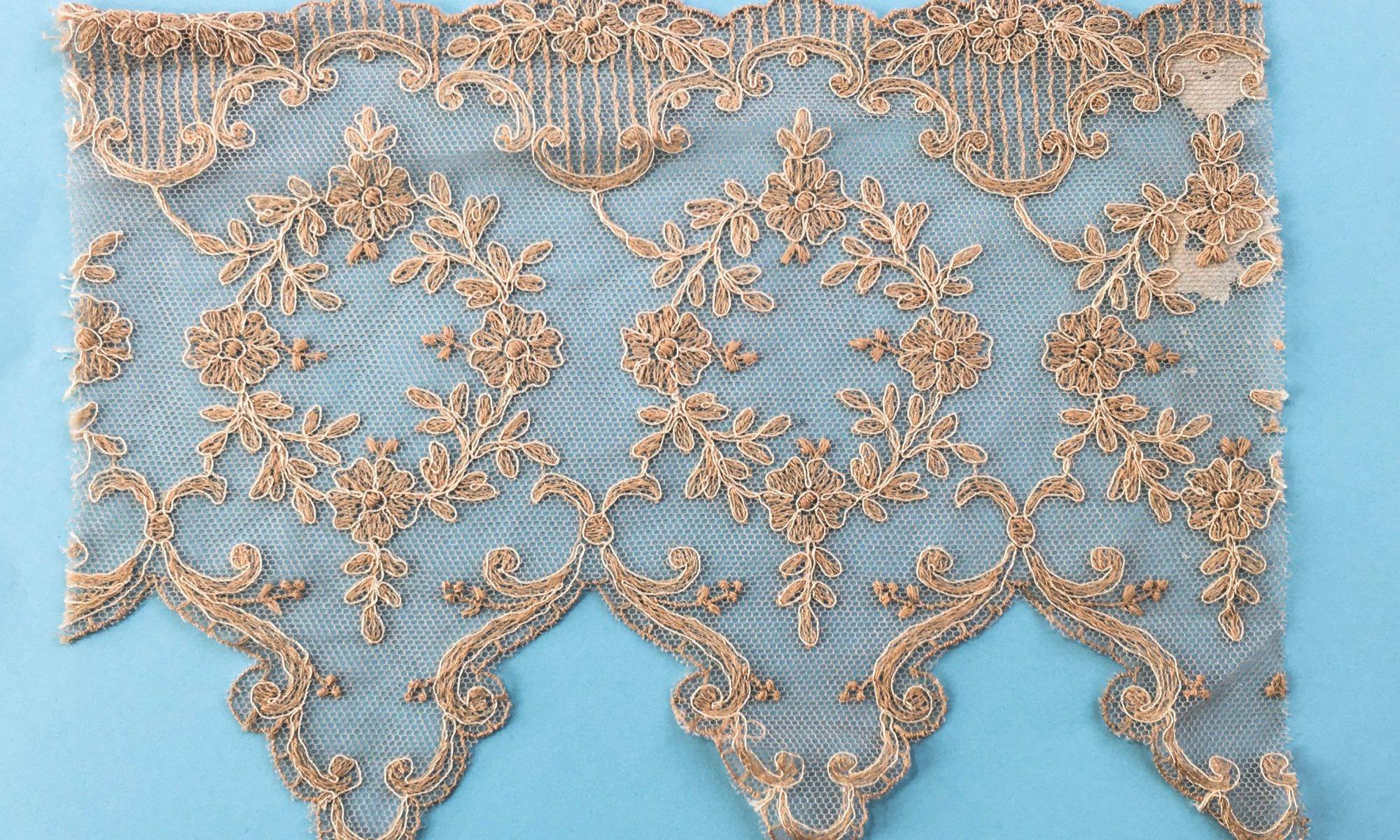 Working in the archive as research assistant for the ‘Lace Unarchived’ exhibition in 2018, I regularly came across the imprint ‘Property of the Federation of Lace and Embroidery Employers Associations’.
Embroidery on net is generally not considered by lace experts to be ‘Nottingham Lace’. The patterning is added to the background net as a second additional step, often in another factory altogether. As an embroiderer, I am interested to find out more about the embroidery side of the industry. Was it significant to the area; why don’t we talk about ‘Nottingham Embroidery’, only ‘Nottingham Lace’? Does the person on the street know or care about the difference?

For my Advanced Research Module I investigated an idea that Sharpe & Chapman (1996) included in their research with the tantalising phrase: ‘Embroidered Lace is not seen as a pure article’(p327). This refers to the trade of ‘running’ or embroidering the pattern by hand on pre-made net, made either by hand or machine (Earnshaw p53-4). But I was also interested in other types of embroidery and other types of net.

I set about making my own ‘net’ or background for embroidery by engraving a net pattern onto different materials and then embroidering using my machines, or embroidering on a background to create patterned holes with a threadless needle.

In the end I abandoned those ideas as I simplified and refined my project, but the samples I created using laser engrave on fine papers and silks are some of my favourites (look at the reflective video on laser samples!), and I will return to some of them very soon for JC Middlebrook.

In my final pieces I used cotton bobbinet from Swiss Tulle to give the lace some body and some stability to the layers within the lightbox. So I embroidered the text as picot layers onto bobbinet for the large lightbox and replaced all laser cut elements with embroidery on net in the small lightbox. The net could be pinned in place to avoid unwanted movement of the embroidery within the box.

Ian had made the large box in April and I still had no idea whether I was going to be able to get a laser design to put in it, so I thought I’d crack on and at least make an embroidered layer. After the success of the text layer in the small box I decided to make the text as picot as a separate layer, as embroidery on net. Click on the gallery below to view how I went about it, more info in the captions

As described in ‘What are Sprigs Brides and Prickings?’, a ‘bride’ is a traditional term for the joins between lace motifs. I was trying to scale up a design to fill the first of my lace light boxes, and bigger overall design size wasn’t working. I thought I could take multiple, smaller motifs, joined together with brides. I photocopied multiple motifs in varying sizes and began laying them out onto a large sheet of paper. The idea of using some keywords to make joins (pictured above) was somewhat tricky as the gaps between sprigs were too wide, making the overall fabric was too floppy, and the words were illegible.

My tutor suggested I try to flow the words between the motifs, making them much closer. I laid out the sprigs on my embroidery software this time, printing off an A4 layout. Using my trusty fountain pen, I took the short sentence I’ve been using throughout the project and wove it between the motifs, looping and expanding the letters to fills the gaps more fully.

“She found something interesting and took it to her teacher, who said don’t be silly we have already decided that isn’t possible”

It wasn’t easy to find a path through the motifs without doubling back, so I used single words in a contrast colour to add more brides

“Charnia” “Tina Negus” “I believe her”

I had to scan the hand drawn layout back into my software to make into an embroidery design, and worked through a number of way of digitising the stitches. Several test stitchouts and refinements required! As always it looks very different before the stabiliser is removed!

Stitching out on water soluble backing was effective, but I tried separating the two layers, the brides to be stitched onto net backing and suspending in front of the motifs (which of course would have to be joined with some kind of stitch) 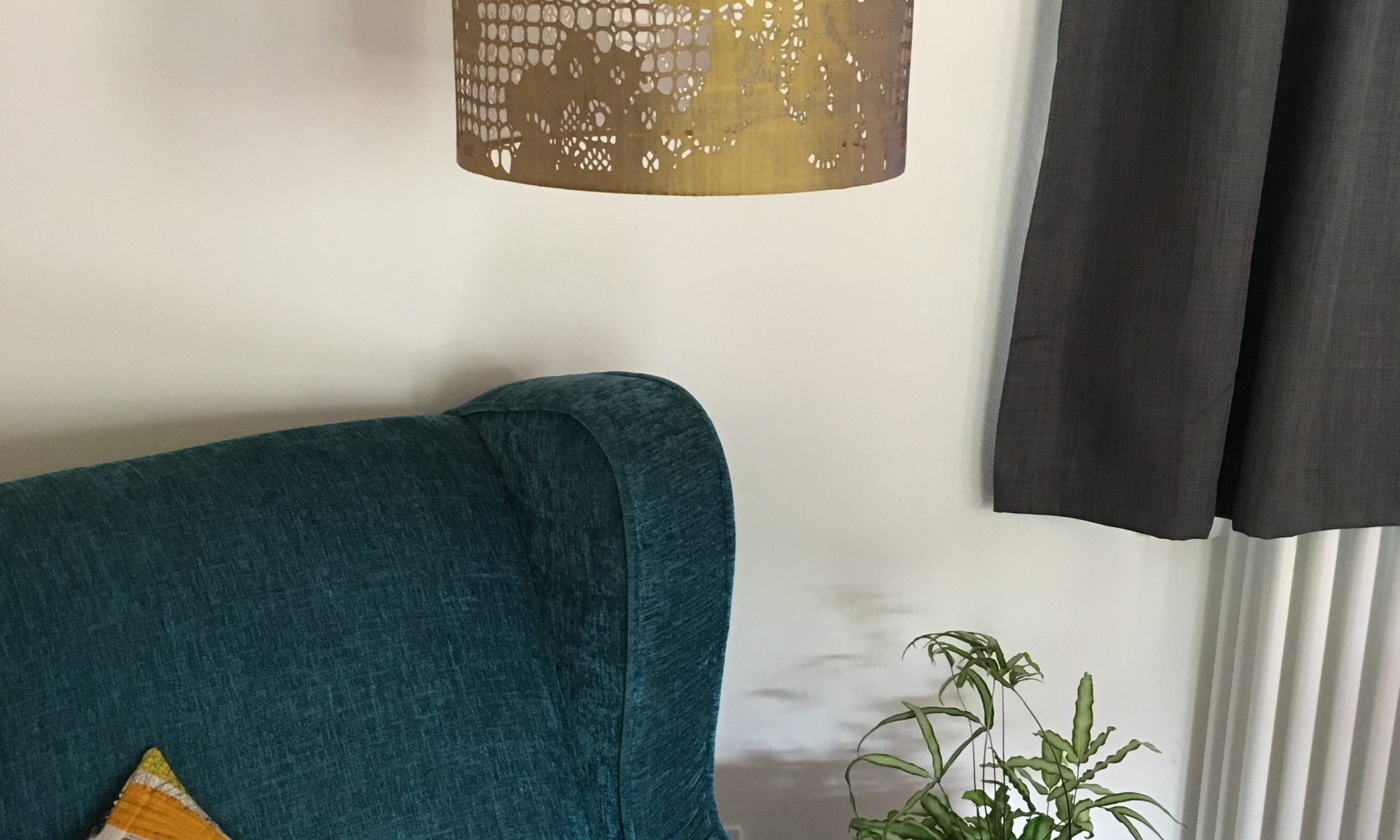 I’ve been exhibiting in Karlsruhe, Germany for almost ten years now. I was invited to join a group exhibition by the GEDOK group in summer 2019. I showed two new lampshade designs, incorporating my laser cut design and LED lights. You can see the lampshades in the gallery below

The blue version had a holographic insert which distorted the lights inside, the gold was simply cut silk. This, combined with a large filament lightbulb, was really eyecatching. I found it distracting that you could see the inside, so if I were to repeat the design I would bond silk to both sides of the stiffening.

The blue lampshade twinkled (see the video below)

I was supposed to travel to Karlsruhe with the work and install it myself. However, I didn’t make it to Germany as my Mum had a stroke the weekend before I was due to leave. I decided to stay at home with her instead. Luckily my fellow artists were up for a challenge and put the whole display together for me. It meant I had to design some step by step instructions for putting the light together. They did a fantastic job!

I used the waste from the laser cut to make a wall art piece. See the gallery below for more information on how it worked 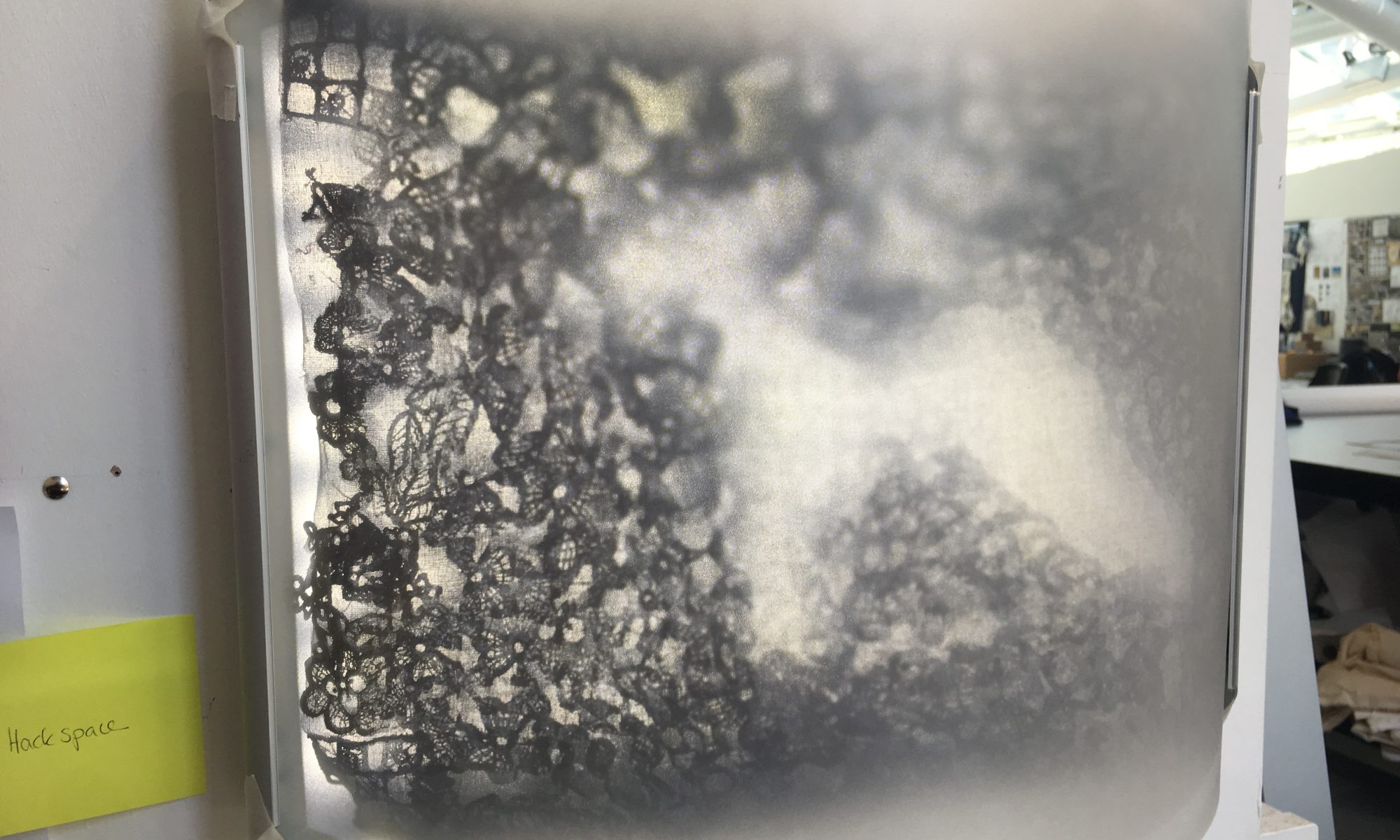 If you have seen the film Arrival (2016), based on a short story by Ted Chiang and directed by Denis Villenueve, you will understand the boundary or border between the visitors and the people communicating with them. They wrote or drew their communications onto the border.​ The human protagonists were concerned with interpreting the communication. My light box experiments in 2019 put me in mind of the glyphs written on that border.

You can see in the video below, I planned to make some kind of light installation, probably freestanding, for my second year. ​I planned to include colour and movement to the light and experimented with how big I could go, and how much distance between light and polypropylene.​

I also used the laser cutter to engrave the front of the poly to see what that looks like (nice, as it turns out, but no effect on the refraction)​. I liked that you can see some kind of pattern, even with the light off. 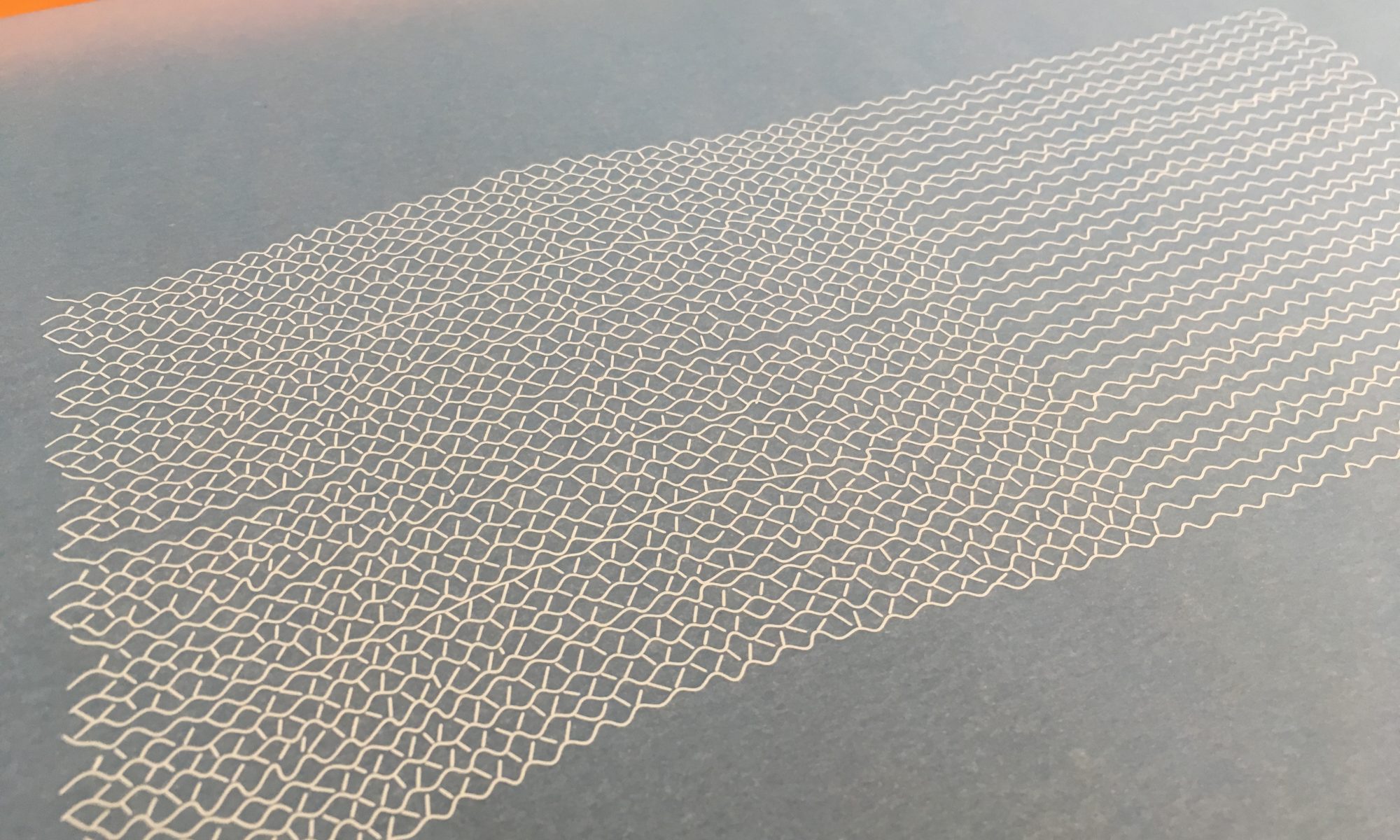 Sailing the sea of #sketchbookwoes, I found myself spending a lot of time in the laser room with Sue Turton. After a basic intro into what the laser may be capable of, I was fascinated by what I could do, not just through cutting but using a low powered laser to engrave or etch on the surface of the material.

The university has a number of flatbed lasers for cutting but one large Grafixscan machine which can be used to engrave all kinds of materials. the construction of the machine meant the base material did not have to be totally flat or thin, and the Grafixscan was super fast, producing engraved samples in minutes or even seconds.

It could engrave areas from a jpeg or (which I preferred) lines of less that a millimetre from a vector file. These lines to me were as the bobbin thread in a lace machine, fine as hair. I imagined ways of using this to engrave a ‘net’ ground on which to embroider. As it happened I didn’t go down this line, but at least it gave me an avenue to investigate while I got my sketch on.