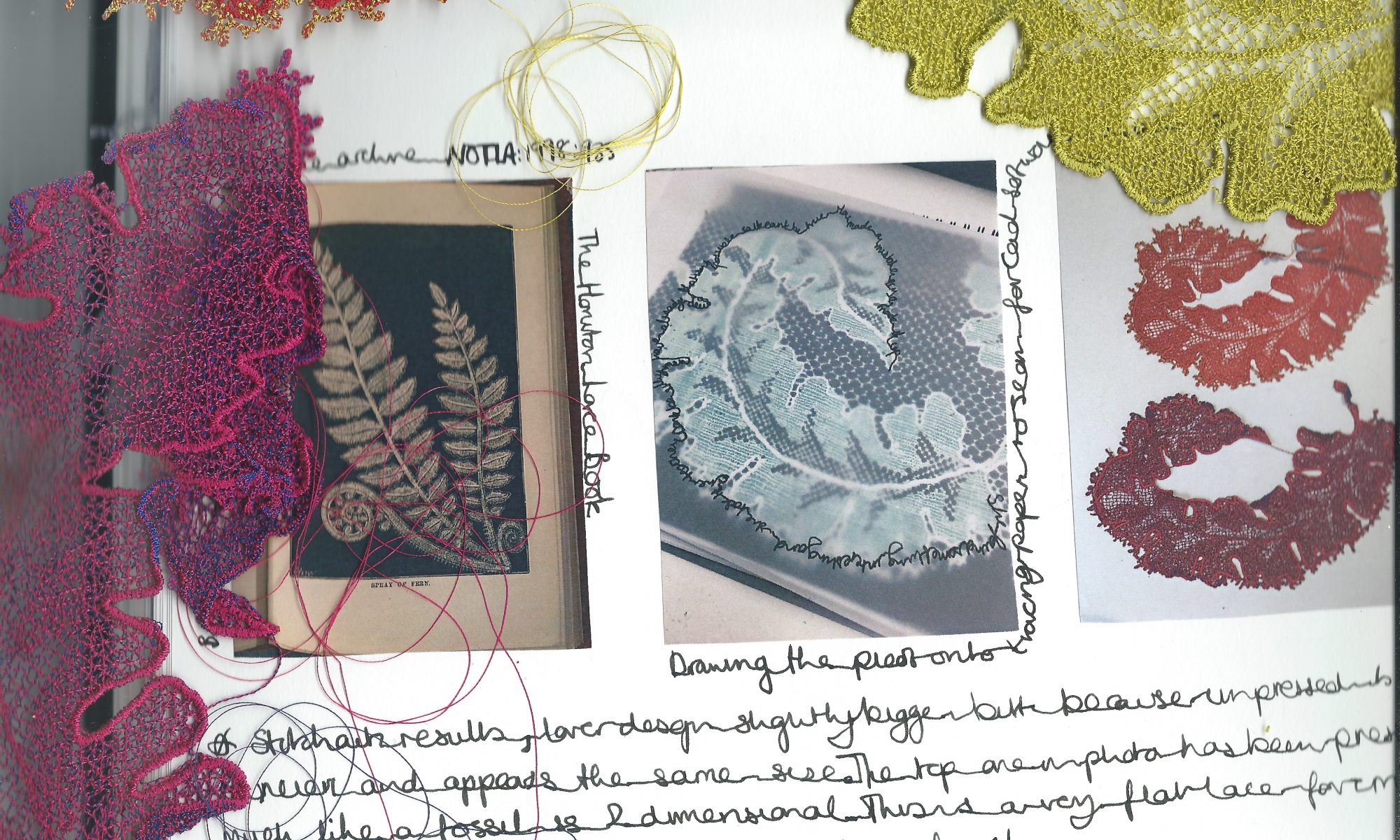 By the time we got to 2020 I’d become comfortable enough to begin a new sketchbook/reflective. This post shows some of the pages form it. It was a mix of printed off photos, stitch samples, hand written text and FINALLY some sketching and drawings.

This gallery shows some of the pages, with samples photographed or scanned as flatlays. I tried to use some overlays and textiles with the pages. I love tracing paper overlays and used this a lot for planning layers in the design. (see the time-lapse video re-creating the small box layout -apologies for portrait orientation!) 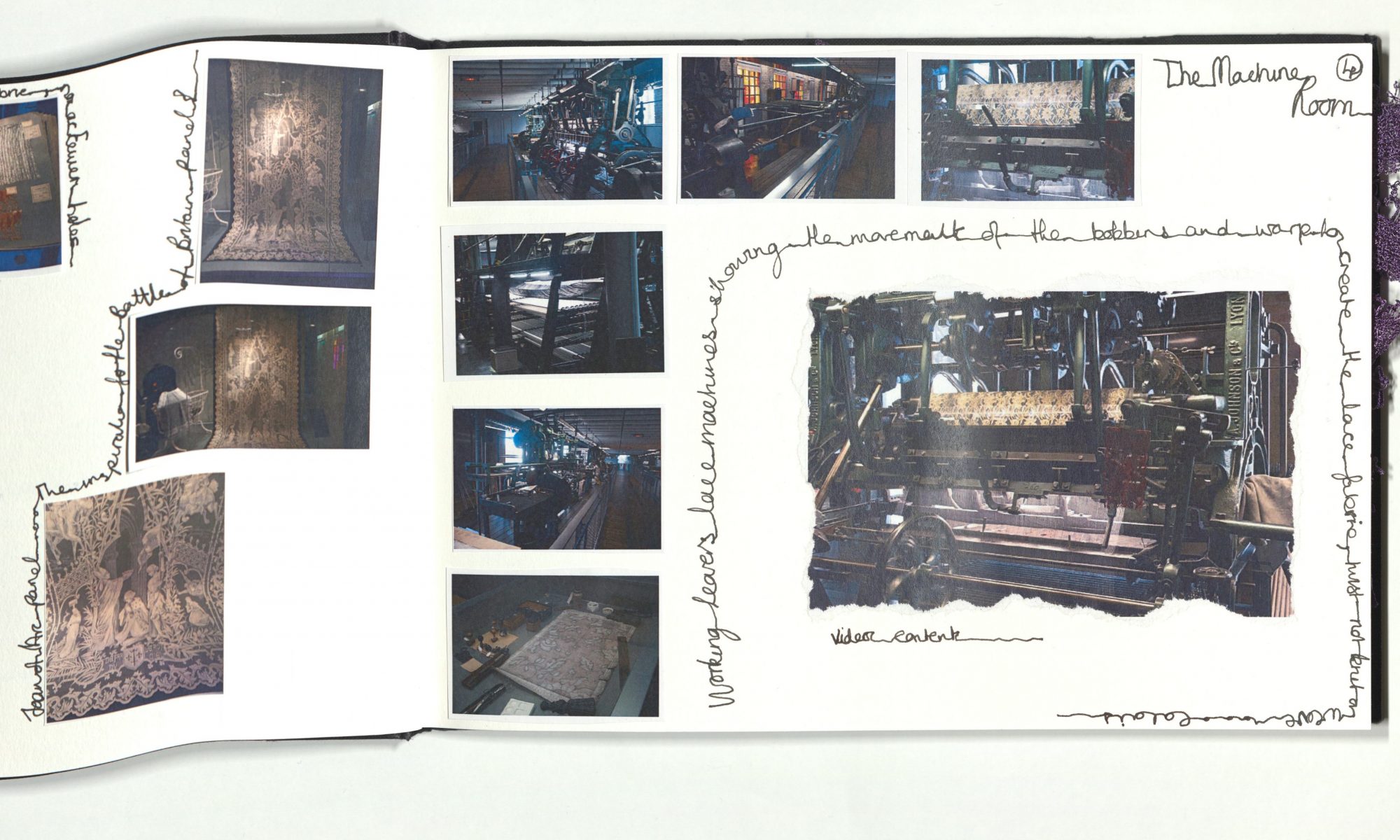 My reflective journal developed before I came out of my #sketchbookwoes. I think I was comfortable with it earlier as I’d given myself permission to limit what I wrote and to use my own style. Anna Piper was really helpful in this, and I saw her reflective journal (with it’s limited space for entries) as a starting point. I eventually used my reflective and sketchbook together and mixed in samples and technical info too.

I’m also considering the possibility of recording this type of thing for JC Middlebrook, and posting videos online showing some design and making process, as part of my social media marketing and promotion.

My eventual sketchbook/journal/technical file is almost full. I plan to continue using a book of this type in the future, possibly going back to a smaller one eventually. The ultimate goal of the reflective is to go back and look at it on a regular basis, to remember your reflections and continually refine your work as a result. 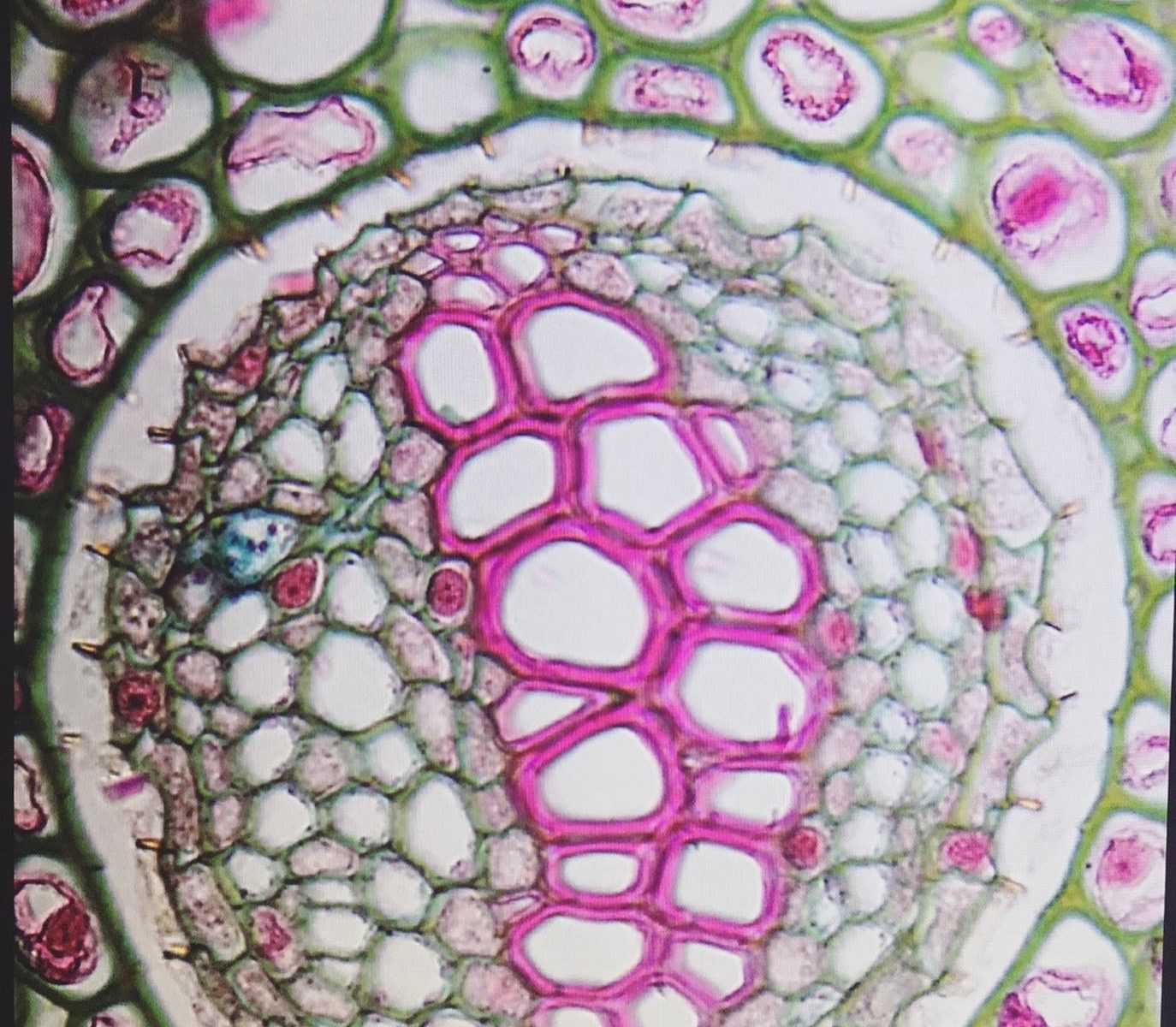 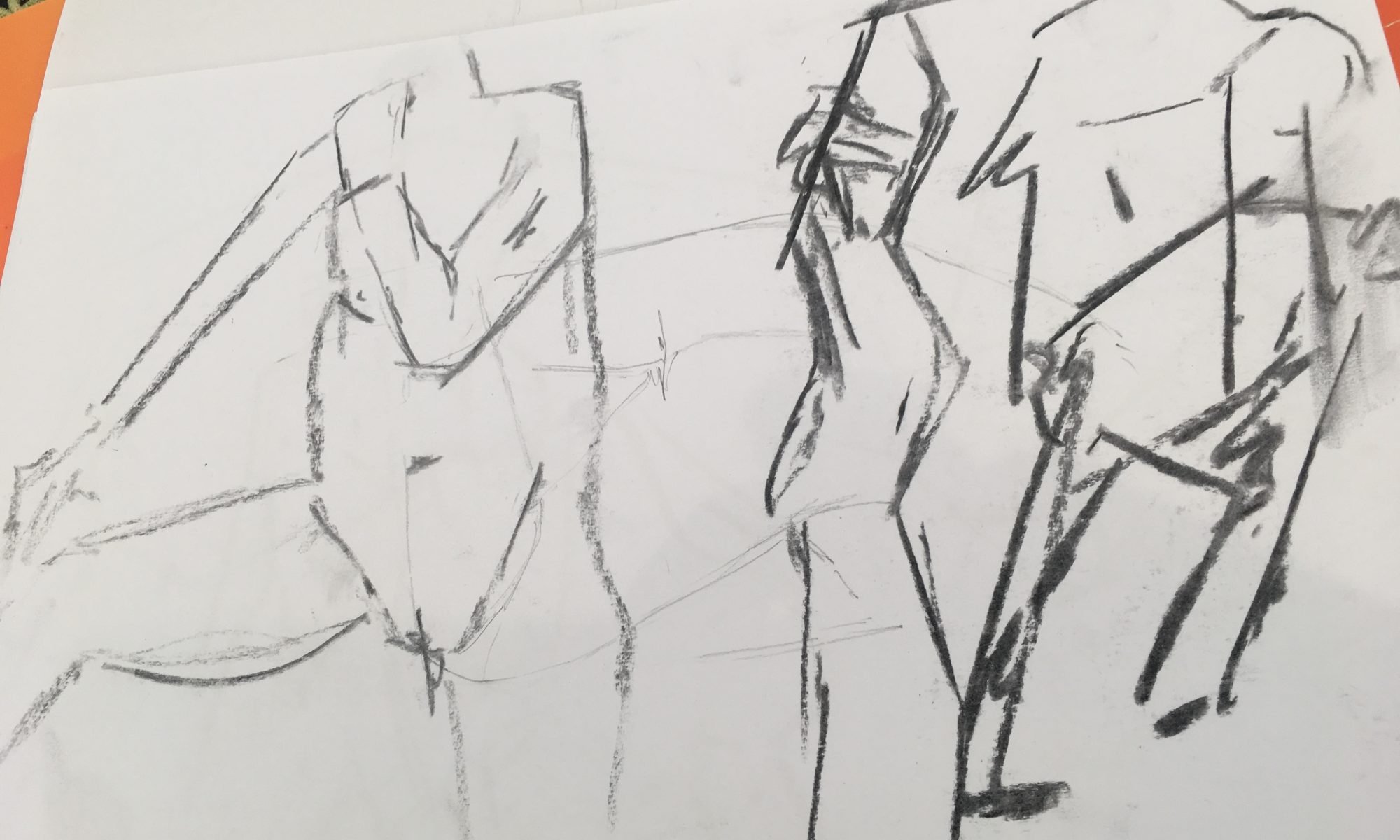 One of my objectives on this whole MA journey was to learn how to communicate visually. It was important to me to overcome a fear of drawing, sketchbooks and art language. I wanted to develop a visual language, and learn ways to communicate my ideas. I envisaged that I would be taught how to do those things as part of the course.

The phrase ‘Just have fun with it’ began to haunt me, I felt like my rescue pup, faced with a range of toys and tennis balls, not having played with a human before. I didn’t know how to ‘play’, let alone have fun and enjoy it. I had no idea how to explore ideas on paper, in fabric or on a computer. I began my own hashtag #sketchbookwoes and dreaded drawing. But I kept trying and attended drawing workshops and life drawing classes, determined to face that fear. I found I enjoyed using ink, it had an intensity of colour that appealed, and I splashed it around with abandon, but without knowing how to take it further.

Click on the gallery below to see some of my trials…

My poor friends listened to me with great patience as I outlined my woes, even loaning or giving me art materials to try with. Thank you Rachel and Gail for your support! Rachel and I went to a sketchbook class taught by the super-talented, patient and understanding artist Helen Hallows. We packed up our materials and papers and turned up at a fantastic eco-venue in Derbyshire. Helen turned the light on for me. She took us through various exercises to loosen up and forget that we were drawing. I tried continuous line drawing with a pen for the first time and that was it. I found had my style, my method and my medium.

Just don’t tell me to play! 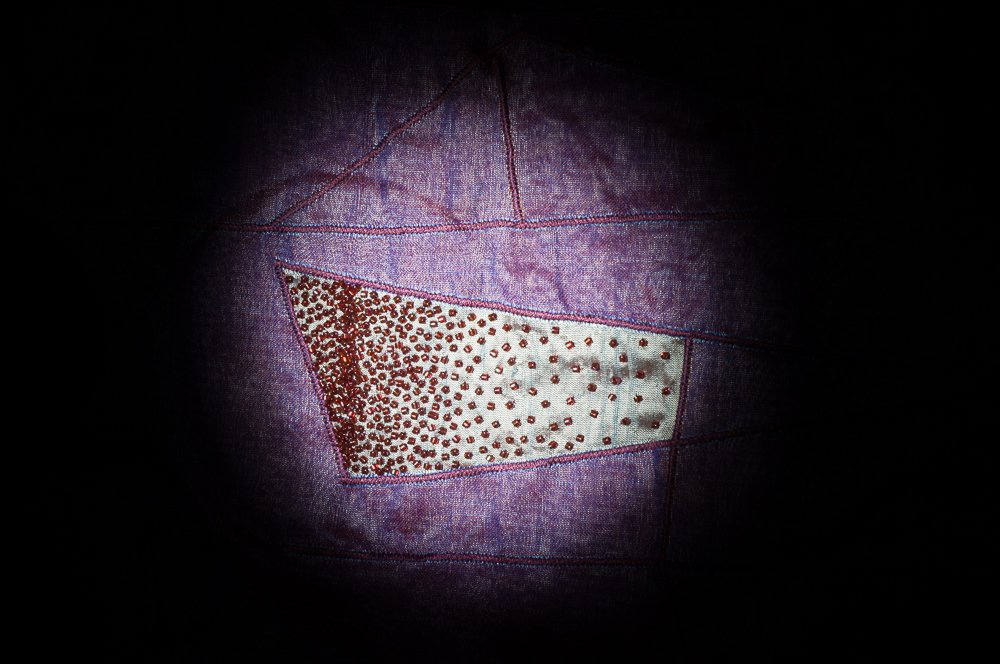 I’d kept some pages from British Vogue 1996, a shoot by British photographer Nick Knight, using high contrast, saturated colour and very dark shadows. In another of his shoots for Vogue from 2004, ‘Shimmer’, shadow is used as a frame for the model.  (Click on the gallery for my comments)

I loved the way that the black was so saturated, and the colours were so rich as a result. I liked that the darkness was used as a prop in the ‘Shimmer’ photoshoot. I tried to use this technique to photograph some samples. I didn’t go much further with the idea of photography in this style, but the depth of shadows and the jewel colour palette has informed the entire project. 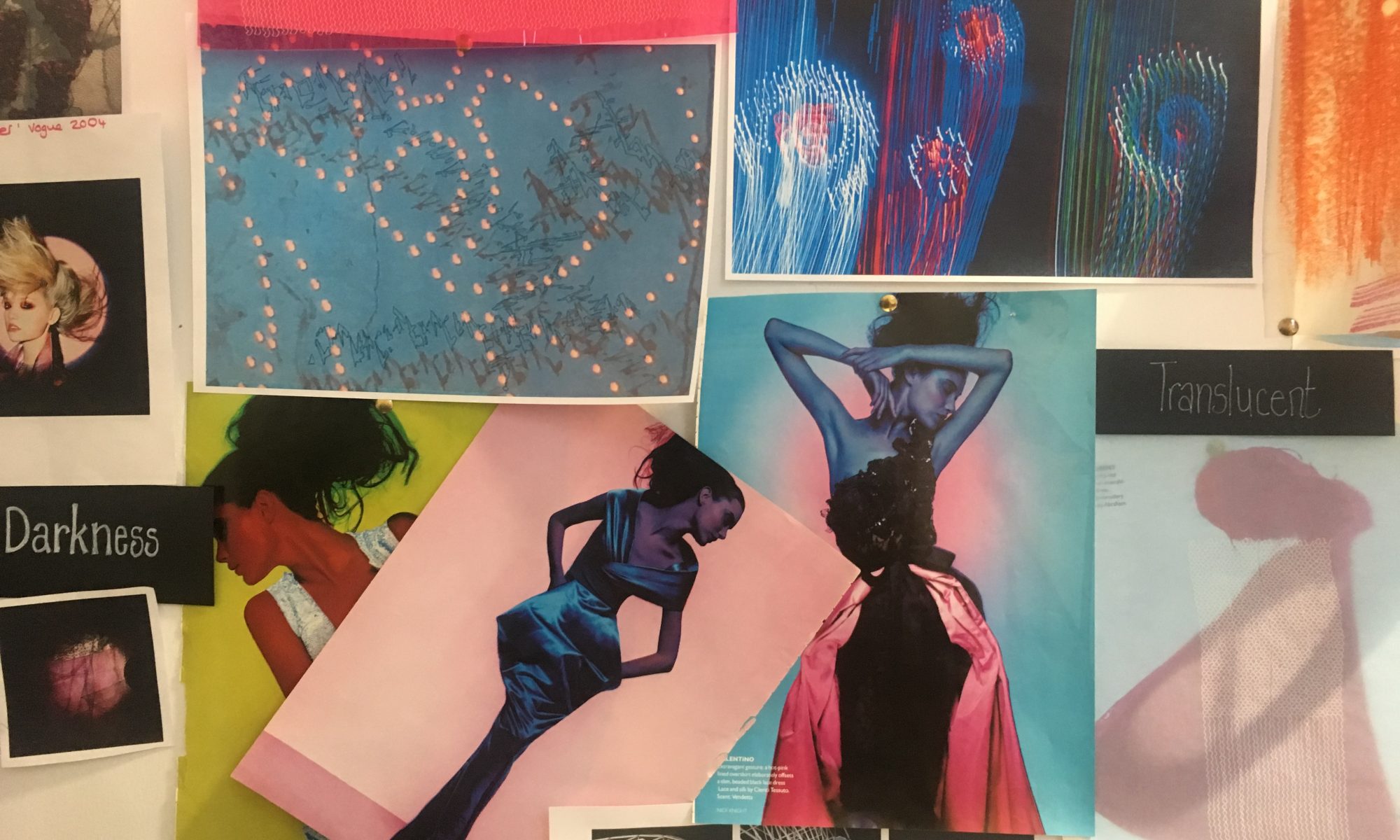 I’d kept some pages from British Vogue 1996, a shoot by British photographer Nick Knight, using high contrast, saturated colour and very dark shadows. In another of his shoots for Vogue from 2004, ‘Shimmer’, shadow is used as a frame for the model. This has informed a way of photographing textile samples and highlighting parts of a sample.

Alongside the use of darkness/light I am interested in ‘dark’ motifs or design themes such as skulls/bones or perhaps something shocking or unexpected in lace. See Jason Holroyd’s use of industrial motif in his laser cut lace designs ‘Missing Industry’ and ‘Class Dismissed’. See also the communist inspired designs of lace designer William Hallam Pegg held in the NTU lace archive.

Along with my other keywords:

Real darkness can be difficult to find, especially in urban spaces, and particularly in places inhabited by the masses. In fact, darkness could be described as a luxury. ‘Darkness is a luxury not granted to Britain’s Council Estates’ (Sloane 2016).

Bright light will hide that which has a lower light level, which can only be seen through darkness. How many of us have been camping and gone outside in the middle of the night to answer the call, only to have our breath taken away by the amount and brightness of the stars? Dark Sky Parks have become a necessity for those wanting to see more than the largest and brightest of stars. According to Falchi et al (2016) 99% of the population of Europe and the US live with night-time light pollution.

Darkness can be as necessary as light for revealing texture. When items are lit from behind for example, the texture or real properties of the material will be difficult to perceive. Turn off the backlight and more can be seen. This can have a philosophical meaning too. In the discussion ‘Dark retreats and sensory deprivation’ Tenzin Wangyal describes Buddhist theory of how removing expectation of external light during a dark retreat, you see more of the ‘internal light’ of your soul.

Similarly, we can see how phosphorescent items are hidden until ‘normal’ light frequency is removed, leaving only the phosphors ‘glowing’ in the dark. Of course, this is a visual effect only. The phosphors glow all the time, we just cannot perceive them until the light conditions allow.

Do galleries find it challenging to exhibit items requiring darkness, resorting to displaying them behind a wall or curtain in order to exclude the light? Can the work hold the darkness within required to reveal hidden elements?

Pieces are usually illuminated in the direction of the viewer’s gaze, if they are lit from the back the detail can be lost. Could this effect be exploited to draw the viewer in to examine one detail, only to reveal another? What happens if intricate items are lit from behind instead? Or if the light is withdrawn as the viewer approaches. What does the darkness, or lack of light, reveal? I will explore layering to create shadow, hide or reveal texture and add richness to the design. Translucent fabrics can add sheen without weight and bring lightness to the design.