As described in ‘What are Sprigs Brides and Prickings?’, a ‘bride’ is a traditional term for the joins between lace motifs. I was trying to scale up a design to fill the first of my lace light boxes, and bigger overall design size wasn’t working. I thought I could take multiple, smaller motifs, joined together with brides. I photocopied multiple motifs in varying sizes and began laying them out onto a large sheet of paper. The idea of using some keywords to make joins (pictured above) was somewhat tricky as the gaps between sprigs were too wide, making the overall fabric was too floppy, and the words were illegible.

My tutor suggested I try to flow the words between the motifs, making them much closer. I laid out the sprigs on my embroidery software this time, printing off an A4 layout. Using my trusty fountain pen, I took the short sentence I’ve been using throughout the project and wove it between the motifs, looping and expanding the letters to fills the gaps more fully.

“She found something interesting and took it to her teacher, who said don’t be silly we have already decided that isn’t possible”

It wasn’t easy to find a path through the motifs without doubling back, so I used single words in a contrast colour to add more brides

“Charnia” “Tina Negus” “I believe her”

I had to scan the hand drawn layout back into my software to make into an embroidery design, and worked through a number of way of digitising the stitches. Several test stitchouts and refinements required! As always it looks very different before the stabiliser is removed!

Stitching out on water soluble backing was effective, but I tried separating the two layers, the brides to be stitched onto net backing and suspending in front of the motifs (which of course would have to be joined with some kind of stitch) 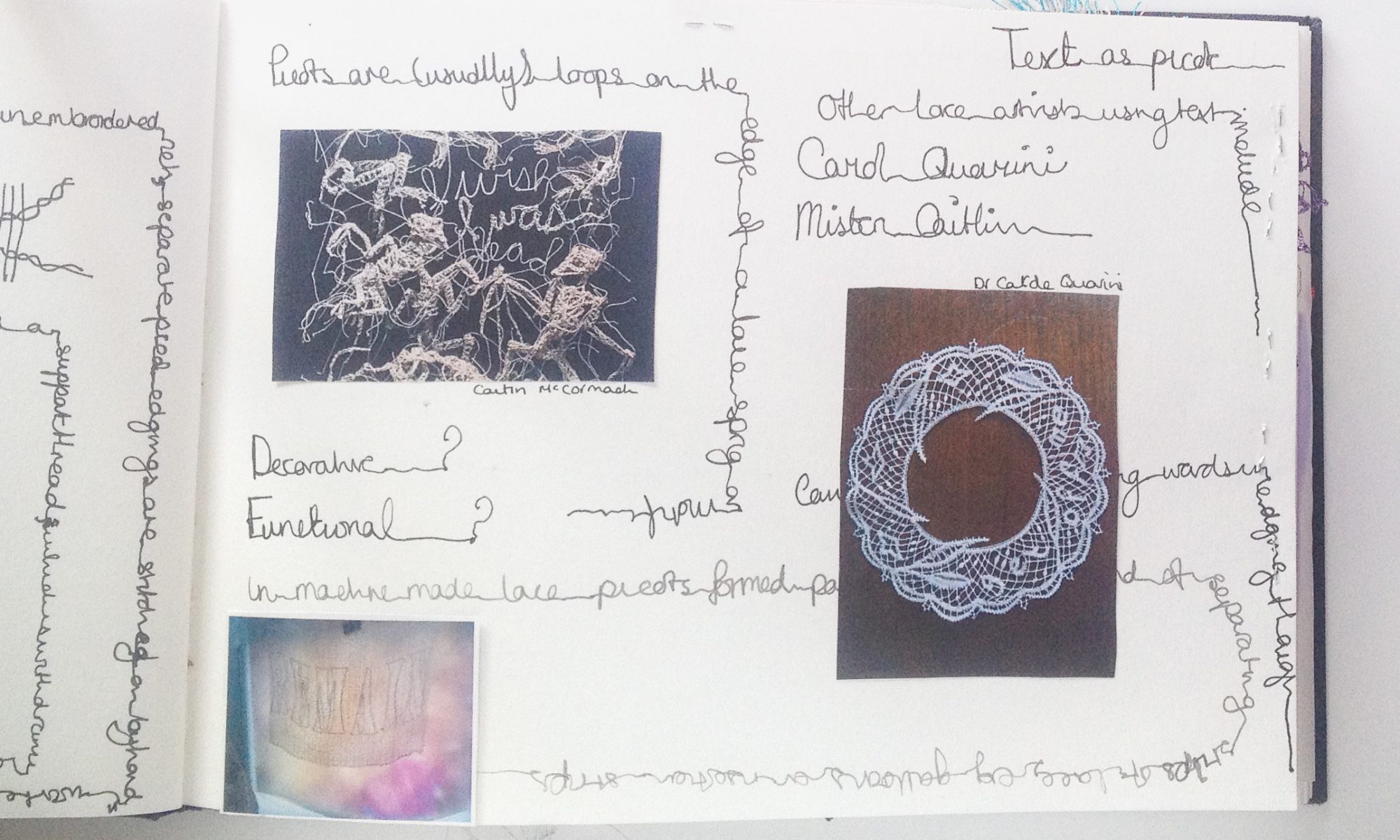 I want to have a narrative and text in my work. There are other lace artists incorporating text, here’s a couple: Caitlin McCormack (instagram @mistercaitlin) and Carole Quarini (@CaroleQuarini)

At first I wasn’t bothered about making the text legible, thinking it was more about the beauty of the lace. But after speaking with my talented friend Michaela McMillan, whose work is centred around storytelling, I came to realise that it was important that the narrative can be understood easily and the viewer can participate fully in the story.

I’ve been influenced by these two lace designers using text as part of the design, and to make political statements through their practice.

I first saw @MisterCaitlin on Pinterest but then found her on Insta. Her work is spiky and full of rage. I love that about it, lace can be seen as demure and feminine but so many lace makers are total anarchists.
From her website: Caitlin McCormack is a Philadelphia-based textile artist who works primarily with crocheted cotton thread, which is stiffened with glue and positioned to resemble osteological specimens. These works convey McCormack’s thoughts regarding the way memories become distorted with the passing of time https://www.caitlintmccormack.com/

I met Carol through Dr Gail Baxter, with whom I worked in the NTU Lace Archive. Carol is a prolific lace researcher and blogger, who visits so many cool exhibitions and places. I hadn’t expected her work to be quite so subversive, but there it is glorying in the profane (with maybe less swearing).
From her website: Carol is a textile artist and researcher who makes and studies lace. Her post-doctoral research studies the history, manufacture and design of net curtains and lace panels.
Her work around domestic violence incorporated words into the lace design, for example this lace coaster with the words ‘get off me’
https://carolquarini.com/

What is a picot? Pat Earnshaw says in A Dictionary of Lace (year) that a pearl, purl or picot is ‘a short loop used to enrich the outline of a [lace] motif, a border or bar’.

In bobbin lace, a picot is formed of two threads twisted into a loop and held in place with a pin. In Leavers (a form of machine-made) lace, picots are held in place using a fine thread called a support thread, which is withdrawn after manufacture.

I was intrigued by the idea of using text around the edge of the lace as a decorative edging, but also to tell the story behind the design. (Click the gallery to read the captions)

I also like the idea of adding text as picot in a separate layer, or even separating it entirely from the shape it once surrounded, just leaving the space where the motif was. The text was too flimsy to hold it’s own shape, so I looked again at embroidery on net to hold the text. See ’embroidery on net’ to find out more